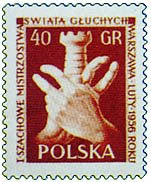 Okay--this has nothing to do with Jewish chess history in particular, but at least it has to do with stamps.

The Polish stamp above commemorates the first world chess championship for the deaf, held in 1956 in Warsaw. I'm all in favor of helping the handicapped, but... what kind of handicap is deafness as far as chess playing is concerned, anyway?! Isn't deafness, if anything, an advantage?? (Incidentally, Tigran Petrosian, the world champion, was deaf.)

(No, I'm not 100% serious here--there are, it turns out, associations for deaf chess players, whose raison d'etre is not that deafness is an handicap when actually playing, but rather when it comes to communicating with other players, arbiters, tournament organizers, etc. who do not speak sign language.)
פורסם על ידי Avital Pilpel ב- 1:21 PM No comments: 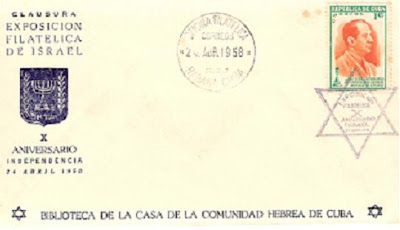 Did I say chess players collect stamps? Perhaps the opposite is more accurate -- perhaps stamp collectors like chess. Above is an envelope from Cuba commemorating the Israeli stamp exhibition there. (As the envelope says, the occasion for the exhibition was Israel's 10th anniversary.) And what stamp did they use? That of Jose Raul Capablanca, the Cuban chess world champion. The envelope belongs to Yosef Sharon, whose father was an Israeli diplomat in Cuba at the time.
פורסם על ידי Avital Pilpel ב- 12:51 PM No comments: 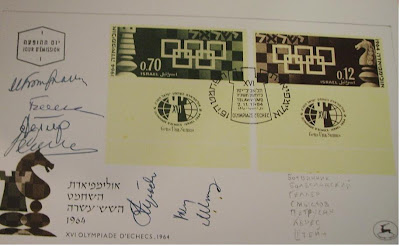 There seems to be quite a connection between chess and stamps. Many people are fans of both stamp collecting and chess. These include not only the owner of the above envelope (who wishes to remain anonymous) but also Izhak Bar-Ziv (who "arrested" Tigran Petrosian) and, to name someone I do not personally know, world champion Anatoly Karpov.

This envelope is a first-day envelope of the stamps the Israeli Post Office created to commemorate the 1964 chess Olympiad. It is signed by the entire USSR team: Botvinnik, Boleslavsky, Geller, Smyslov, Petrosian, Keres, and Stein.
פורסם על ידי Avital Pilpel ב- 12:29 PM No comments:

Above is the heading of Al Hamishmar's chess column (edited by Eliyahu Feygin) on May 21st, 1948--that is, the first column printed in the state of Israel, which was declared on May 15th, 1948.

1. Two chess problems and one endgame study.
2. Solutions to the previous endgames and studies.
3. The current standing in the ongoing solving contest.
4. A game from the contemporary world championship tournament (Euwe-Botvinnik, French Defense, drawn in 40 moves).
5. A report that Ya'akov Meises, (that is, Jacques Mieses, "Ya'akov" being the original Hebrew of the English "Jacob" and the French "Jacques") despite being the oldest contestant, finished third in a tournament in Sweden.
6. Two "breaking news" items: Botvinnik is the new world champion, and...

And they say chess players live in a world of their own. Whatever gave people that idea, I cannot imagine.
פורסם על ידי Avital Pilpel ב- 1:30 PM No comments: 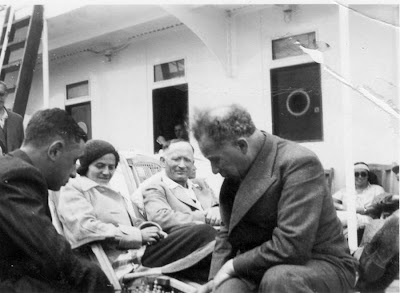 We have already seen David Ben-Gurion at play. In this photo, we can see one of his most bitter political enemies--or perhaps victims--Pinchas Lavon (born Pinchas Lubianker) playing chess.

Lavon (left) is playing on board ship in 1941 with Yonah Kasseh, also later an Israeli politician--an MP and the secretary of Mapai, the party of both Lavon and Ben-Gurion. The picture was forwarded to me by a donor who wishes to remain anonymous, and who, in turn, received it from a member of the Lubianker family.

Lavon held many important political posts in the Israeli government. He is best known, ironically, as one of the chief figures in what became known as the "Lavon affair". In the 1950s, an Israeli spy ring, operated by the IDF's intelligence branch, was caught in Egypt. Blame for the ring's exposure was assigned to three people in particular: Lavon (then Minister of Defense), "the Senior Officer" (Colonel Binyamin Gibli, head of the IDF's intelligence branch) and "the Third Man" (Avri El'ad, the commander of the spy ring).

Whether Lavon was in fact responsible, and, if not, what was the motivation of those who blamed him, is to this day hotly debated. In particular, it was claimed Lavon ordered the spy ring to plant bombs in Egyptian movie theatres in Cairo, as part of a Rube Goldberg machine -like effort to hurt Egyptian-British cooperation ("operation Suzanna"). Loyally carring out this absurd order, it was believed, led to the ring's capture afterwards. Lavon denied it, claimed the order originated much lower in the chain of command, and saw the investigation as a personal vendetta by Ben Gurion and others, in particular Shimon Peres.

It is not the purpose of this blog to decide the issue. One thing is clear, though: it was shown by Isser Har'el that El'ad was, quite simply, a traitor: caught soon after he set foot in Egypt, he agreeded to betray those under his command in order to save himself. So Lavon, whether or not he gave the order, and whatever his ministerial responsibility, was not (and could not have been) in any way morally responsible for the ring's capture. The ring was doomed the moment El'ad was caught, long before "operation Suzanna".
פורסם על ידי Avital Pilpel ב- 12:50 PM 1 comment: 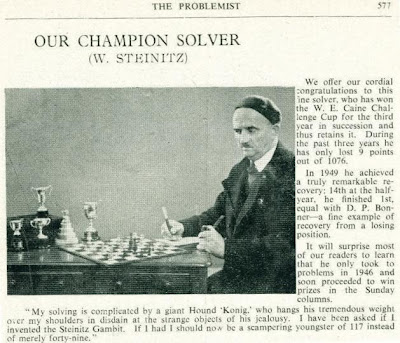