Moshe Roytman informs us that a large, full-page-headline (though on p. 6) obituary of Aron Nomzowitsch in the Yiddish-language Unser Express [אונזאר אקספרעס], 'After the Death of a Great Chess Genius', on April 9th, 1935.

A reader of this blog noted that, contrary to what I was writing for years, the English transliteration of the Israeli journal שחמט is actually Shahmat, not Shachmat. Thank you, anonymous poster -- and it goes to show that, once more, errare humanum est. Now I only have a few thousands of typos to correct...
פורסם על ידי Avital Pilpel ב- 11:47 AM 2 comments:

Moshe Roytman, a frequent correspondent, sent me the following headline, from Unser Express (in Yiddish), Sept. 20th, 1929, p. 15, about 'The Jewish Maiden Vera Menchik, which had Defeated the Greatest Chess-Players in the World'.

What evidence is there that Menchik was Jewish? Technically it is possible that her father was since Menchik is indeed sometimes a Jewish name: a diminution of "Mann", i.e., "little man", as Jewish Family Names and Their Origins (Guggenheimer & Guggenheimer, Ktav Press 1992, p. 507) notes. But that hardly means all those with that name are Jewish -- any more than all those named, say, Rosenberg are Jewish (Alfred Rosenberg, to name one, was one of the major Nazi war criminals tried in Nuremberg, for example).

The most likely explanation seems to be that Unser Express was, simply, misled by Menchik's last name into assuming that she is Jewish, but is it possible that she was in fact Jewish, or "half Jewish" (i.e., on her father's side, which would not make her Jewish by Jewish law)?
פורסם על ידי Avital Pilpel ב- 11:22 AM 6 comments:

Chess in the Newspapers

The following photo -- given to me by Mr. Gdali Roysman (my spelling trasliteraiton from the Hebrew, I hope I am not misspelling it...) -- shows Davar Le'Yeladim ["Davar for Children"] of Dec. 8th, 1954. It shows yet another early attempt to make chess popular among the young in the mainstream press in Israel: 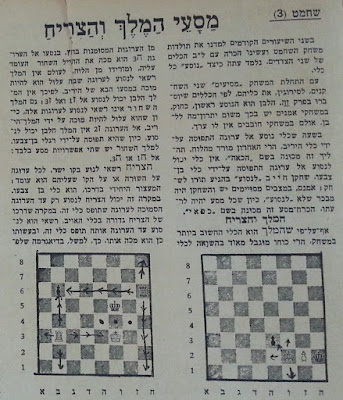 In the following simultaneous game by Marmorosh, an interesting event happened. This game, says the (unsigned) article in Shachmat, was from a simultaneous display in Holon (Israel), 1956. Annotations by Shachmat:

'An extremely interesting position! Both queens are undefended and threaten each other. The black queen cannot move, due to immediate mate.'

More on the "Mystery" Tournament...

Having procured, with Alon Gruenfeld's generous help, the 1964 issues of Shachmat, all I can say is -- so much for the "mystery". As I already noted, the games were published in Shachmat in 1964. Above is the back-cover report in Shachmat, and all the games of the international section appeared in full in that and the next three (August - October) issues of Shachmat. There was also a complete crosstable, and that of the Israeli masters' "B Tournament").

I should have known better; I fell into the trap of believing Chessbase and similar online / computer sources are reliable. They are indeed, when it comes to recent (ca. 1990-) tournaments and international events, but not at all when it comes to smaller, historical events that were mostly reported in non-European (or American) sources. This is why Jeremy Gaige's and other archivists' work, such as the multi-volume Chess Tournaments Crosstable (which, alas, I do not have access to) and Chess Personalia are indispensable.
פורסם על ידי Avital Pilpel ב- 12:23 AM 2 comments: