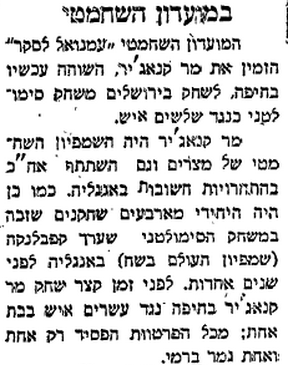 Why? Roytmann also notes [link in Hebrew] that, in a (justifiably positive) review of Persitz's book about Kniazer, Shaul Hon quotes Persitz as saying that he found little biographical data about Kniazer because... 'he would never speak about himself'. The complete review -- in Hebrew -- with a game fragment, more biographical detail, Persitz's comments, etc. -- is here (Maariv, Oct. 2, 1959, p. 15).
פורסם על ידי Avital Pilpel ב- 12:37 PM No comments:

An Earlier Youth Tournament -- and Which Hon is this?

The same column mentioned in the previous post (which see for credits) also had another interesting note: of a school match, which predates the 'Palestinian Youth Championship' mentioned here, between the Montefiore and the 'Trade High School' [בית הספר למסחר] schools which ended "4.5:3:5" (sic -- 3 draws and one win; the score was 2.5:1.5) in the latter's favor.

Of interest is that one of the Montefiore pupils was named 'Hon' -- is this perhaps the same Shaul Hon (1922-2009, from 1925 in Palestine, according to his Hebrew Wikipedia page) that later became Israel's most prolific chess author and was often mentioned in this blog? The age and location, at least, fits.
פורסם על ידי Avital Pilpel ב- 6:54 AM No comments:


Tomasz Lissowski had mentioned, in a very good article on the chess archeology web site, that chess historians must not limit themselves to chess columns and periodicals. While I am still (of necessity) using mostly such sources, one needs to remember that chess was not isolated.

As we have seen in a previous post, Jacque Mieses had visited Palestine in May 1936 and was particularly impressed by the 'Menorah' chess club' in Jerusalem. Clearly (from the names) the players were the same players as in the 'Lasker' club, but why the name change? This column, brought to my attention by Moshe Roytman (above) makes clear what happened.

As the report says, 'after successful negotiations, the "Lasker" chess club and the "Menorah" club have been united. Most of the active "Lasker" players joined "Menorah", and from now on the "Menorah" will have one of the most active and organized chess bodies in the country".

Were there two chess clubs then? No. The report speaks of the Menorah club as opposed to the Lasker chess club. Menorah (est. 1929) was a general club, originally established in 1929 for veterans of the WWI 'JEwish Legion' (הגדוד העברי) of Jewish soldiers in the British army. When 'Lasker' joined it formally, Menorah acquired (so to speak) the chess players, where it had no chess played there before, and Lasker' splayers began to use the club as its location.

Below is a (Hebrew language) memorial now at the Menorah club's building location in Jerusalem, taken from this blog on Israeli and Palestinian historical sites, which (for Hebrew speakers) is well worth a visit. The memorial says, 'Here stood the Menorah Club [and] The Officer's Club [בית הקצין], established by Hebrew Battalion and IDF veterans, 1929-1982.'

One may speculate in what way did the union with the Menorah club have to do with Mieses' later visit or with the chess patron Mieses mentioned. Did the 'Lasker' players believe Mieses should be entertained in better surroundings than their old club, leading them to move to the new Menorah club? Was the chess patron a member of the Menorah club who made them "an offer they couldn't refuse"? Was he a veteran of the Hebrew Battalions?

Such speculations aside (if any concrete information is found I will post it), Lissowski's warning -- that looking only into chess periodicals and columns, however efficient, has its myopic risks -- is good to know.