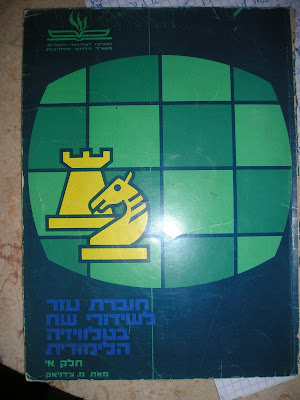 Here's something you don't often see together: chess and television. This is the cover of Hoveret Ezer Le'Shidurey Shach Ba'Televisia Ha'Limudit (A Companion Booklet for Chess Broadcasts on Education Television) by IM Moshe Czerniak. Apparently, Czerniak--the only professional chess player in Palestine or Israel until the 1990s--persuaded, or was asked, to help with teaching chess on educational television in the 1970s. Notice the shape of the TV screen in the cover art...

At the time, Israeli TV was state-controlled and, therefore, did not have to take into account market forces. This has many negative results, but one of the few positive results of state-controlled television is that educational television can broadcast truly educational--as opposed to pseudo-educational--material, such as programs teaching chess. Since Israeli TV "went commercial" in the 1980s, it goes without saying that chess disappeared from the small screen...
פורסם על ידי Avital Pilpel ב- 6:39 AM No comments: