From the same column mentioned in the previous post, we see an attempt by Shaul Hon to show chess in war. Taking his cue from a lecture by the IDF's chief of operations, Gen. Yadin, which described the attack on the enemy's left flank (towards Gaza) as a diversion, so as to switch to an attack on his right flank (towards Bir Alsuj and Ujah). He found a similar ending, by Safonov (1929), where "Israel" (White) wins by first attacking on "Egypt"'s (Black) kingside, and then switching to the queenside, with Hon's military-style annotations: 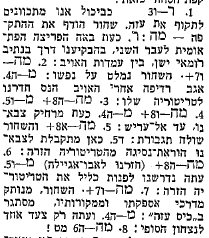 1. Bf3 we seem to wish to attack Gaza. Black repulses the attack: QxB. Here comes the sudden break towards the other flank, using an old Roman way, between the enemy's position: 2. Qf7+ Black runs for his life: Ke4. We entered enemy territory while pursuing him: 3. Qe8+ Kf5 4. Qf8+ Ke4. Now our army goes all the way to El Arish: 5. Qa8+ Black sends reinforcements: d5. Now we receive a withdrawal order from enemy territory: 6. Qe8+ (we are back in Abu Agila). Kf5. We now completely evacuate enemy territory: 7. Qf7+. Black, cut off from supplies and sources, encloses himself in the Gaza pocket: Ke4. And now just one step to victory: 8. Qh6 mate!

While chess is, of course, often compared to war, it is to be wondered how often chess actual games (or studies) were deliberately annotated to illustrate specific "real life" battles.

Moshe Roytman had also brought to our attention Shaul Hon's column from the above date. The first interesting report is that the weekly Parallel 50 (ph. spelling) writes on 31/12/1948 (no. 119) that 'despite the state of war, the young country pays much attention to chess', and mentions in particular that the master perform simuls for soldiers.  and that the national champion, Aloni, recently won a 41-soldier simul (+35 -5 =1). We mentioned such games often in this blog, in particular Aloni and Barav 'doing their part'. This is surely one of the first reports in the foreign press of chess in the (then new) state.
פורסם על ידי Avital Pilpel ב- 11:15 AM No comments:

What is so special about this? Roytman notes that the winner, as Ma'ariv notes on Jan. 16th p. 7, is a Romanian which 'intends to emigrate to Israel as soon as next month'. This eventually did not happen so the championship went to Lidiya Gal. Is there any other case of a player -- male or female -- being allowed to even participate in a national championship based on their promise to emigrate to the country, let alone winning the championship... and then not emigrating after all and forfeiting the title?
פורסם על ידי Avital Pilpel ב- 10:43 AM No comments:

To the issue of 'chess in the schools', two contributions from a frequent correspondent to this blog. First, in the same Davar chess column of April 28th, 1950, p. 31, there is a photo of Itzchak Aloni giving a simultaneous display in the Shalva high school: 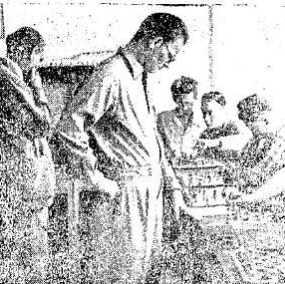 In addition, the contributor notes that chess began to be taught in a high school in Hadera in 1949, when Davar noted (Dec. 9th, 1949, p. 27), that a teacher 'agreed with the parents' demand' to 'give a chess lesson to all the students in his class' once a month, which was 'enthusiastically received': 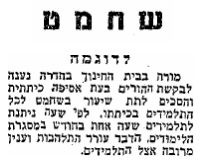 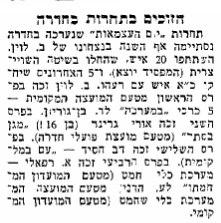 It is an official 'Independence Day' tournament. It notes that it was in the 'Swiss system' but in fact describes it as, first 20 people playing under the 'loser is out' principle and the remaining five 'played against each other' -- a mixed "playoff" / league system, in other words.

The same correspondent noted that the tournament was announced in the same paper on April 28th, 1950, p. 31, with the note, inter alia, that "the Hadera [Chess] club published nice posters to advertise the tournament'.

The prizes were (some information about the books added using interent search and not found in the original article):

First prize: 'In the Battle' by David Ben Gurion, in five volumes -- about the War of Independence (1947-1949).
Second: 'Secret Defenders' [Magen Ba'Seter] by Zerubavel Gilad [ph. spelling] about the actions of the Palestinian [Jewish] underground warriors in Europe during WWII.
Third: 'A Nation at War' by Imanuel Ha'Deni [ph. spelling] about Jewish until in battles from WWI to WWII.
Fourth prize: a chess set.


It is notable that, as befitting the times, just after the war of independence, and the occasion -- a tournament to commemorate Israel's second independence day, the books all dealt with Israeli, or Jewish, military events. Still, it is true that at the time there were very few chess books in Hebrew.
פורסם על ידי Avital Pilpel ב- 9:08 AM No comments:

The following game is interesting both from an historical and chessic point of view. From the purely chess based point of view, it is an example of 'crime and punishment'. White did not play well and found himself a piece to the bad. Israel Barav (Black) could have won in many ways. But he chose the most elegant method: having both his bishops pointing at the enemy king and his rook on the same file as the opponent's queen, he launches a sacrificial attack ending in a nice mate.

From the Jewish chess history point of view, it is an interesting game due to it being played against the Bar Kochba team. 'Bar Kochba' - named after the leader of the 2nd century Jewish revolt against Rome -- was a Zionist sports organization, established in the late 19th century in Eastern Europe following the first Zionist congress, but by the 1930s (and earlier) having clubs in Germany and elsewhere as well.

Unfortunately the opponent's name is (to us) a bit unclear; it seems to say 'Abrahamson' but if any reader has a more accurate suggestion, please notify us. 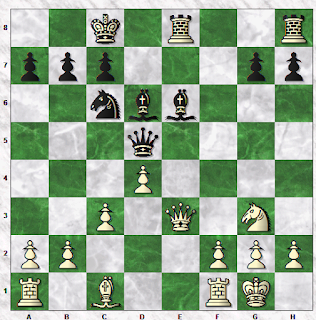 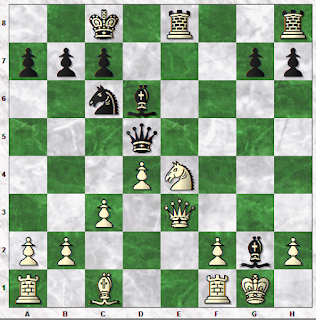 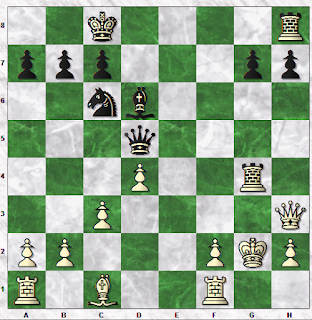 As we have seen in this blog already, Israel Barav was a very good attacking player, and had many interesting victories. Here is one, with a remarkable final position. 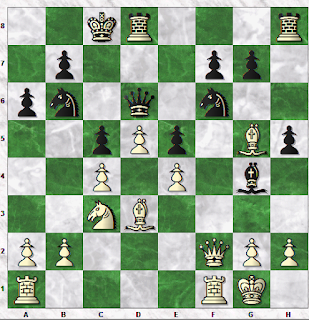 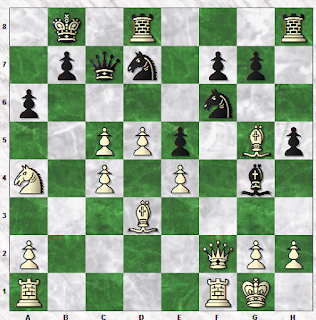 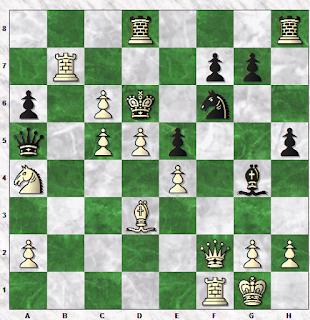