Editors of chess columns used to be (before the internet, at any rate) the "agony aunt" for tyros and novices. This was especially true when, as in Palestine in the beginning of the 20th Century, there were very few--often only one--chess column published.

The first regular chess column published in Palestine was in, of all places, The Palestine News--the weekly of the WWI British Expeditionary Force in Palestine. On July 11th, 1918, driven to distraction by the letters he got, the chess editor felt forced to say:

A. C. Mayhew, you may expect nothing but “teasers” in this column for a long time to come. When I do put up an easy problem, I get enough letters to sink a Dreadnought, and even the fairly stiff ones bring in enough letters to wrap one up in.

To Everyone who thinks a problem can be done with a “checking” move, I am reluctantly obliged to be rude enough to say,—“Don ’t write to T. P. N. about it.”

In reply to S. H. Francis… Oxon’s solution of problem No. 14 was acknowledged on 4.7.18, look it up and in future spare the poor Chess Editor who cannot answer letters until they reach him.

Wihenlee, what makes you glad causes the Asst. Editor to ask in sarcastic irony,: “Do you want to turn T. P. N. into a bally Chess Magazine?”

Later, one the first Hebrew-language chess columns was M. M. Marmorosh's in Davar. Here are selections--all from November and December of 1930--from his column:

To Mr. Silman: it is customary (though not an absolute requirement) that the key move to a problem is not a check or a capture.

To Mr. Mendelstein: it is allowed to create another Queen when a Pawn reaches the eight rank, even if the original Queen is still on the board. A player can have extra Queens, Rooks, etc.

To P. Hoffman, Jerusalem: stalemate is a draw; there’s no point contesting this fact.

To our correspondents: stalemate is not a loss but a draw. 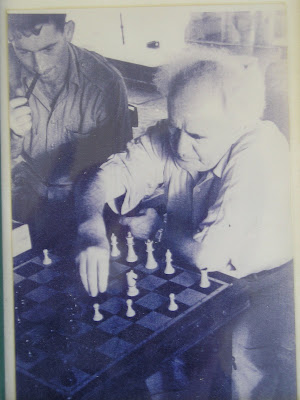 "A Genius Meets a Genius" 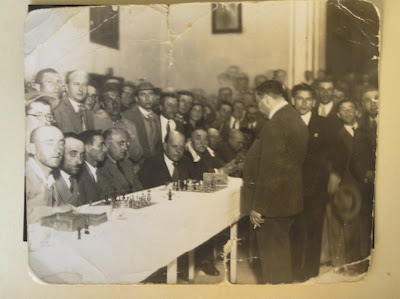 The photograph belonged to Menachem Mendel Marmorosh, who was the most active chess master and organizer in in Palestine at the time. It was made available to me by the kind permission of his children, Ruth Doral and Mordechai Marom.

Biyalik was well-known as a chess fan; among other things, he--with Marmorosh and others--was on a committee which chose Hebrew words for chess terms. To this day most of their terms are in use.
פורסם על ידי Avital Pilpel ב- 10:37 PM 1 comment:

Six World Champions (and 50+ Grandmasters) in one Notebook

Eliezer Pe'er, the captain of the Israeli team to the 1960 Leipzig chess olympiad, came well prepared: he brought with him an autograph book and asked everyone to sign it. Most agreed. 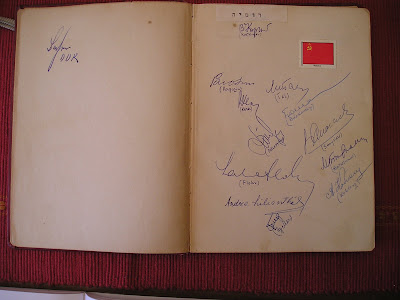 There are the signatures of six world champions past, present and future: Mikhail Botvinnik, Max Euwe, Robert "Bobby" Fischer, Tigran Petrosian, Vassily Smyslov and Mikhail Tal. Other famous players include Salo Flohr, Svetozar Gligorić, Viktor Korchnoi, Andor Lilienthal and Miguel Najdorf, to name just a few. Above we have the Soviet team's signature. Below, the American and Argentine ones. 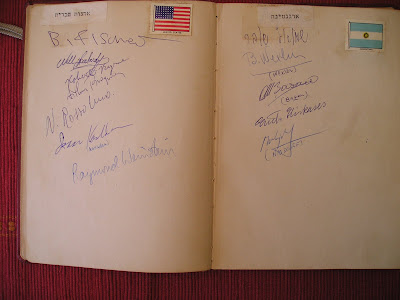 Hello there in Blog Land!

This blog is about my past time--Jewish Chess history. I will add posts and material here as time permits.
פורסם על ידי Avital Pilpel ב- 9:24 AM No comments: