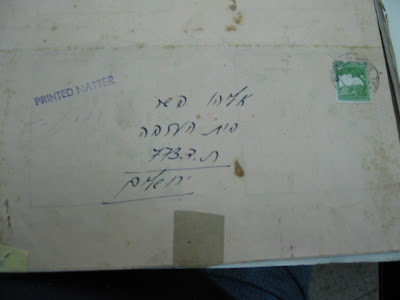 This time, from Eliyahu Fashcer's collection (see previous blog entry), a personal letter he got some time before the establishment of the state of Israel in 1948. How can we tell? Because the stamp used says, "Palestine" (that is, the British Mandate of Palestine). The "printed matter" inside was a chess problems journal -- Fascher was already an active problemist.
פורסם על ידי Avital Pilpel ב- 8:22 AM No comments: 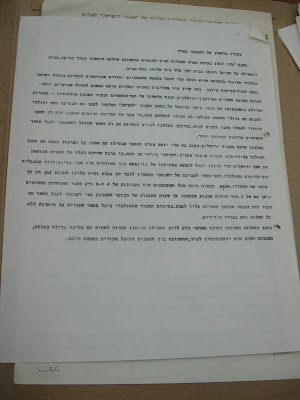 In Eliyahu Fascher's archives (currently in the Yad Tabenkin Institute, http://www.yadtabenkin.org.il/) I have found the following interesting note. My translation from the Hebrew:

In 1958 the first international tournament took place in Israel. Its first part was in Haifa, in the Rothschild house on the Carmel mountain, and the second part in the Helen Keller house in the Yad Eliyahu neighborhood, Tel Aviv.

As the Israeli Chess Organization's secretary at the time I was given the task of bringing famous Jewish chess players to the tournament. The Israeli team had traveled to the Munich Olympiad -- then travel was still by ship, and tournaments sometimes took two weeks or more. At the same time the first problemists' conference took place in the Piran, Yugoslavia, and, in neighboring Portoroz -- the large international tournament with Bobby Fischer and Mikhail Tal. As a correspondent of "LaMerhav" newspaper I got funding for the trip and there could meet the world's chess greats. I wasn't too successful, since the Russians already were boycotting us, and only the Jewish grandmaster Laszlo Szabo agreed to come. In Munich we managed to recruit to the tournament grandmaster Samuel Reshevsky and a few players of lesser rank.

We sailed to Israel on the ship "Jerusalem". In the evening Yosef Porat comes to me and says that, when walking with his wife on the deck, he met the Dutch master Van den Bergh who told him an interesting take. Reshevsky evicted him from their cabin, since the moment he set foot on a ship named "Jerusalem" he cannot stay in the same room with a gentile (there were two gentiles among the guests: Wade from England and Van den Bergh from Holland.) When I went to Reshevsky's cabin I found him studying a page of the Talmud and we had to wait a long time for him to finish. The problem was that all the players were in cabins for 4 or 6, and only the two most important players had a dual cabin. After persuasion talks that lasted into the small hours, Sammy Reshevsky agreed to accept the gentile, on the condition that he must leave the cabin during prayer times. By the end of the trip it turned out the Dutch player got a few lessons about Judaism from Reshevsky and they parted as friends.

During the long sail there were numerous blitz games played, and we even had an official tournament with a large party at its end. The MC was Yosef ("Tommy") Lapid, which hanged around between the masters and got free chess lessons. 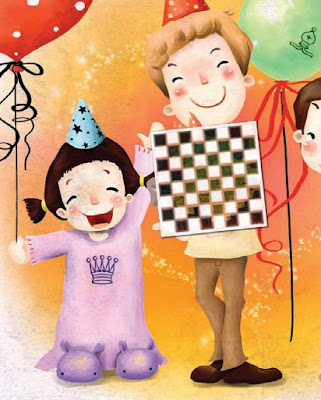 Okay, so the image above shows a chess board with a dark square in the lower right corner. This in itself is not too remarkable, of course. It is, however, a bit more remarkable when the image in question is on the cover of the Israeli Chess Association's Official Magazine. (Feb. 2008 issue.)

Perhaps the whole thing is an inside joke: the issue is coming out during purim, a holiday when one is supposed to dress in silly costumes. The cover shows children dressed up in such chess-related (imaginary) costumes; perhaps the dark square in the lower right corner is deliberately to add to the silliness. 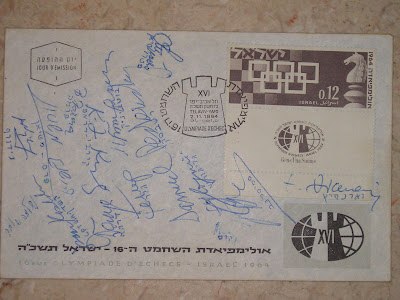 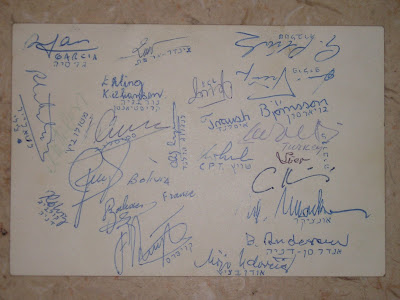 The above envelope is a "first day" envelope issued by the Israeli Postage Service to commemorate the 16th chess olympiad, on Nov. 2nd, 1964, with the Olympiad's cancellation mark and one of the two stamps printed by the IPS to mark the occassion. Prices have changed, by the way: the stamp is for 0.12 Israeli pounds, which today would be 0.000012 new Israeli shekels, or about 0.000003 US dollars...

On the back: Rene Letelier (Chile), "Garcia" (either Gilberto Garcia of Cuba or Raimundo Garcia of Argentina -- probably the latter, since both Najdorf and Schweber, his teammates, signed), Smyslov and Geller (again), Milan Matulovic and Mijo Udovcic (Yugoslavia), Bent Kolvig and Borge Andersen (Denmark), Franciscus Kuijpers and Christian Langeweg (Netherlands), Erling Kristiansen (Norway), Silvain Zinser (France), Trausti Bjornsson (Iceland), Miroslav Filip (Czechoslovakia), Gideon Stahlberg (Sweden), Wolfgang Unzicker (West Germany), the captain of the Swiss team (presumably not a player, as the signature doesn't fit any of them -- does anybody know who he was?), Nevzat Suer and another unidentified player (Turkey).

Thanks very much to www.olimpbase.org for much of this data (e.g., precise English spelling, teams, and so on.) Some of the players who signed (e.g., Geller and Najdorf) do not appear in olimpbase's web site for the 1964 olympiad since they were formally non-playing team captains.