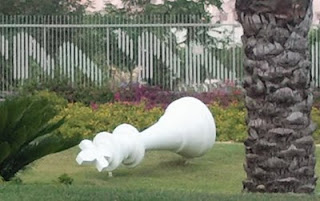 Above is my suggestion for the largest chess piece in the Middle East. It is a white king, about 6' or so, found as a lawn decoration next to the Israel Electric Corporation's building in Haifa (the building's photo is in the link).
פורסם על ידי Avital Pilpel ב- 11:24 AM No comments: 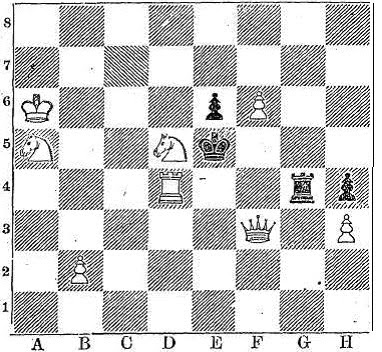 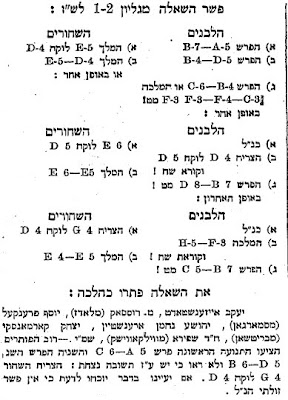 The material for this post were all found using Tel Aviv University's database (using the Hebrew-language interface, which shows Ha'Zfira in its search options).
פורסם על ידי Avital Pilpel ב- 9:24 AM No comments:

"This is my Life" 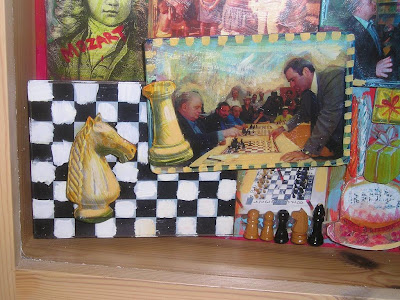 Above is part of a large picture, or perhaps collage, that hanged in the late Yosef "Tommy" Lapid's home. As he described it to me, "this is the picture of my life" -- it was given to him as a present a few years before, and is a collection of his achievements and career in pictures.

A man who rose as far as being the vice-PM of Israel, survived the holocaust, led a successful political party, edited important papers as a journalist, served as an MP in the Israeli parliament for a long time, and so on, nevertheless found chess so important for it to take a whole quarter of the mural. True, he also edited the ICA's newsletter for years and served as its president after retiring from politics, but still...

By the way, apparently Lapid played a special chess variant, on a 8x10 board. But at least the lower right square is white.
פורסם על ידי Avital Pilpel ב- 9:46 AM No comments: 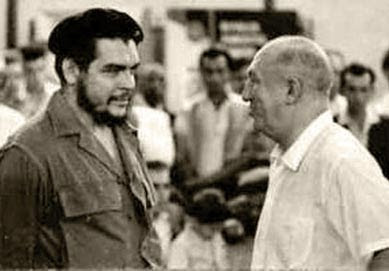 To illustrate the problem with Jewish names in chess history, let us take the player best known as Miguel Najdorf. He had changed his name to the Spanish Miguel (that is, Michael) as an adult, after settling in Argentina. According to Gaige's Chess Personalia: a Biobibliography, his birth name was Moishe Mieczslaw Najdorf (roughly; some letters in the name I cannot write here due to font problems -- see here for the exact typography). Wikipedia -- admittedly not the most reliable source in many cases -- speaks of "Mendel (Mieczyslaw) Najdorf". Then, Hatzophe (6.11.64) speaks of... "Moshe Menachem Najdorf" -- משה מנחם ניידורף.

Who is correct? They all are. Leaving aside small variations in spelling (Moishe/Moshe, Mieczsalw/Mieczyslaw), Najdorf's Hebrew given name was (probably -- see below) Moshe Menachem. This is the name he would be called in religious ceremonies. But like most Jews born at the time (1910) in Europe, he was also given an "everyday" name. The Yiddish name associated with the Hebrew "Menachem" is "Mendel" -- hence the common combination "Menachem Mendel" in Hebrew names and literature, such as Habad's late Menachem Mendel Schneerson or Shalom [or Sholem] Aleichem's fictional Menachem Mendl [sic]. Growing up in Poland, young Najdorf also would use the Polish version of "Mendel" -- "Mieczsalw".

There is one caveat. While Menachem is, indeed, almost invariably the "real" (Hebrew) name associated with "Mendel", Hatzophe's writers, like most writers in the Israeli press at the time, did their best to "Hebraize" non-Hebrew Jewish names. This meant that they might have, knowing that Najdorf was known as "Moshe Mendel" originally, simply assumed "Mendel" had to be associated with "Menachem". This is very likely, but would be hard to prove or disprove conclusively.

E.g., if Najdorf's birth certificate said "Moshe Menachem" it would be proof, but if it didn't, it would not be a refutation. The name "Menachem" might well be used only in Jewish religious ceremonies and not printed on an official Polish birth certificate. If anything, it's likely only the Polish "Mieczsalw" would be given by the parents for use on an official Polish document.

Naturally, the best evidence would be a statement about his various name changes from Najdorf himself. The interviews he gave when visiting Israel in the early 60s do not refer to the issue. Does anybody have more information?
פורסם על ידי Avital Pilpel ב- 8:20 AM No comments:

Some of my Father's Personal Recollections... 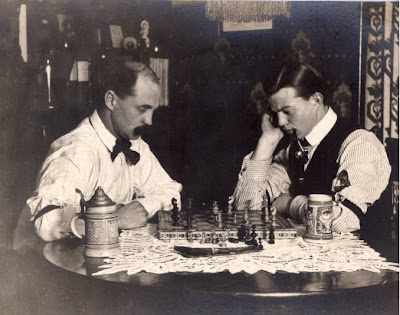 This time, from my own father's recollections about chess in Israel in the 50s:


One time my parents were asked to help a returning immigrant, a man from Poland, to have a room for a few days. They agreed and put him in the spare room. In the middle of the night my father [my grandfather - A.P.] sees a light in the room. He opens the door and sees the man sitting in bed deep in thought with a chess board in front of him.

As he would -- it was Moshe Czerniak.


My father was from Horodenka [today in the Ukraine, then in Poland -- A.P.]. He was very proud of the fact that a great chess player, a true genius, came from there.