In the 1936 championship of Tel Aviv, the game between Y. Taub and S. Weil reached the following position. 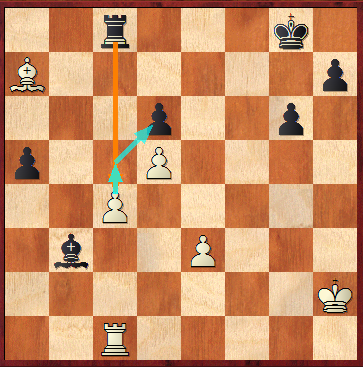 White's position seems hopeless. Black is a pawn up and has a better position.

In Moshe Czerniak's Ha'Sachmat (Vol. 1 no. 1 p. 14, Sept. 1936) we read that there took place 'a few weeks ago' in Tel Aviv (i.e., summer 1936) a small 'youth tournament' involving eight young players from all across the country. The top places (in order) were taken by Bistritsky, Carmon, and Alhanovich (ph. spelling in all cases) -- the first two from Jerusalem, the last from Tel Aviv.

Is this the first youth tournament -- as opposed to a tournament where young people played, simultaneous displays, etc. -- in Palestine? As promised, here is a (partial) translation of the article by Mieses posted here -- see original post for complete credit and sources.

The article notes, first, the Palestinian team's achievement in the 1935 Olympiad. It notes the team in the Olympiad and other strong players – most of them, as we have seen, recent immigrants: Enoch, Dobkin, Winz, Czerniak – who played in the Olympiad of 1935 – and, 'for example', Macht, Glass, Mohilever and Marmorosh as additional strong players, once more showing how chess improved since the German (or rather, European) invasion (for some reason Mieses does not mention Porat as the player on the 1st board). Expecting a high level of competition, however, he found out that his expectations were only in a few cases fulfilled, due to the 'unfortunate fact' that, 'Jerusalem excepted', chess in Palestine 'lacks overall organization', despite the fact that hundreds of chess fans play in cafes in Tel Aviv and Haifa every day. The Palestine Chess Federation, notes Mieses, exists, but due to constant lack of funds, seems 'doomed to a shadowy existence', and the game he gave in their 'hardly suitable' club (+3 =2 -1) 'was terribly weak'. Similarly in Haifa there could only be arranged a 14-game simul (+12 =1 -1).

On the other hand, the Tel Aviv chess powerhouse organizer – Marmorosh – who had the chess columns in Davar and also (since the mid-30s) Ha'aretz arranged for a 33 board match (+21 -4 =8). Marmorosh tried to arranged further events but couldn't do it 'by himself'. Politics enter the issue: a few strong players live in smaller towns far from the center, but due to the 'unrest on the ways' – i.e., the Arab revolt, then nearly at its height, which made travel there dangerous – this was not done.

On the positive side, Mieses is full of praise for chess in Jerusalem, where the local chess club belongs 'as a special section to the comfortable Menorah club', with president (at the time) Prof. (in the Hebrew University) Torczyner – whom we have encountered before as a fearless fighter for the purity of the Hebrew language, in particular when it comes to chess terms (he was Shaul Hon's mentor).  and players such as Cherniak and Mohilever. The club benefited from another "new acquisition" – the 'chess patron' M. Weitz, who lived in Berlin until 'two years ago', and arranged many events. He played, first, two 'interesting' games (simultaneously) against two groups of three consulting players (=2), a blindfold simul against 'strong players' (+3 =2), and a simultanrous display against 24 with 'some of the best players' (+17 =4 -3), and ending with the following 'serious game' against Mohilever: 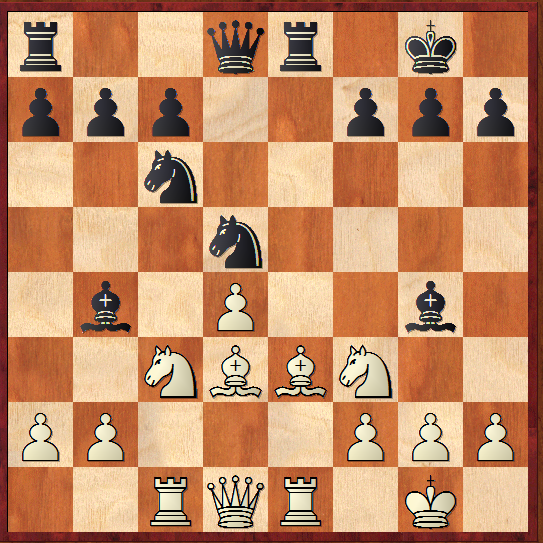 The World's #1 Expert on Castling

Tim Krabbe is a well-known chess historian and author. I hope he will forgive me for stealing -- for once -- an amusing endgame from the 2013 London rapids from his superb web site (item 391). My justification is the Israeli point: the winner was Boris Gelfand, playing against Michael Adams.

In the position above Adams (Black) played 24... Nd7? which was answered by 25. 0-0-0! winning the exchange (and later the game). As Krabbe notes, missing the possibility of castling happened in the past many times.

It is not surprising Krabbe points out this particular game on his web site. After all he is -- if such a thing exists -- the world's expert on castling. Wikipedia notes that in the early 70s he composed a chess problem exploiting the fact that the FIDE definition of castling in force then allows White to castle "extra long". Krabbe gives such castling the natural designation 0-0-0-0 in his 1986 book Chess Curiosities; for some reason, Wikipedia prefers 0-0-0-0-0-0.

What is "extra long" castling? With a promoted rook on e8 and a king on e1, Krabbe noted (following, if Wikipedia is correct, Max Pam's original discovery) that castling was legal, so long as the newly-created rook had not moved, and all other conditions (the king is not in check, etc.) are fulfilled. It is done -- again, taking the FIDE rules in force at the time literally -- by moving the rook to e2 and the king over it, to e3, in one move. Of course, the reverse -- with a promoted rook on e1 -- is possible for Black.

Later, FIDE amended the rules, explicitly requiring both king and rook to be on their own first rank -- much like, in order to avoid similar difficulties, the rules now explicity require that a pawn be promoted to a piece of its own color.