Sometimes we need to remember that not everybody plays chess, or sees the world as chess players do.

One example is in the following headline from Israel's most popular news site, Ynet, about the recent world championship between Magnus Carlsen and Vishy Anand (link in Hebrew): 'The World's New Chess Champion: A 23 Year Old Norwegian Model'.

To be fair, the article itself is far more reasonable, concentrating on his chess achievements, calling him (inevitably) a 'chess genius' and noting that he only models 'in his spare time'. But still, the editor obviously thinks Norwegian models would be much more interesting to the average reader than old boring chess players, even world champion caliber ones.
פורסם על ידי Avital Pilpel ב- 11:43 AM 1 comment:

A Warning from History


A certain Magnus Carlsen had, it is rumored, won a rather important match recently.

Young and enormously talented, we hear the usual prediction about him winning the world championship: that this will make chess massively popular, as in the case of Susan Polgar (who, frankly, should know better, presuming she is serious and not just trying to please the interviewer) which argues cheerleaders in chess might be the next thing, or others arguing that it will make chess cool, that we are now in the "Carlsen era", and so on.

Possibly. But while Kasparov won the world championship in a similar age and indeed ushered in a nearly 20-year-long unchallenged reign (though without cheerleaders, except of the metaphorical sort), one should note that the equally young and talented Tal, Capablanca, and Fischer either lost the title on their first attempt to defend it, or else (in Fischer's case) failed to defend the title at all. Edward Winter's Chess Notes -- see "Chess History" link on the links list -- is an excellent source for numerous successful or failed predictions of this sort. Also, for rather obvious reasons, no matter who wins the world championship, cheerleaders and millions of new chess fans are not too likely.

All this is not said, of course, to belittle Carlsen's achievement, but as a note against making such predictions.
פורסם על ידי Avital Pilpel ב- 2:52 PM 1 comment: 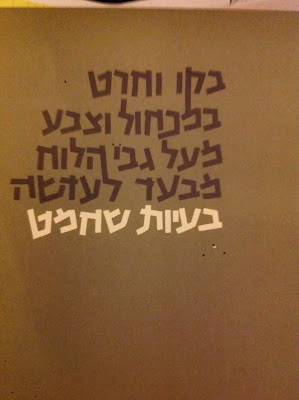 We have often commented in this blog about the connection between chess and art, and between chess in Israel and Israel's various wars. Above is a picture of the title page of a boxed set of five booklets in memoriam of Yeshayahu "Shaiy" Blaustein (link in Hebrew; using Jeremy Gaige's English spelling of the name from Chess Personalia).

Blaustein (1949-1972) was a young architect, who was killed during his military service in a car accident on Dec. 30th, 1972. The fifth booklet is titled, 'chess problems' and has 30 of his compositions. The material is the post below is taken from this boxed set.

A Haifa resident and a Technion graduate, he was part of the group of talented young players who included, inter alia, Bleiman. Here is Blaustein (dark shirt on right), looking on at Bleiman (with the white pieces) playing, probably in the Technion's chess club in the late 60s.  The booklet has a total of 30 such problems, of many types -- "regular" problems, helpmates, selfmates, maximummers, etc. 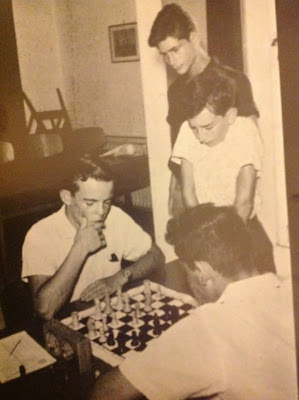 He was especially interested in problems that show close relationships between different positions: changed mates and twins. Yoel Aloni notes he was extremely talented in creating problems with changed play, and adding that he was by far Israel's greatest talent in the late 60s and early 70s -- four prizes and 20 [! - A. P.] honorable mentions in four years.

Below is his most famous problem, which won for him the Ben-Zion Hendel cup for fairy problems in 1970 (together with other problems), a helpmate from Al Ha'Mishmar, no. 3086. The "twin" is with Ka3 --> Kc7. Each one of the "twins" has (deliberately of course) two solutions, given at the end of this post. 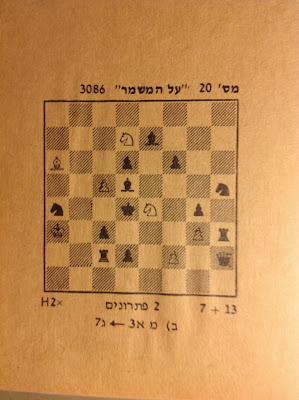 Blaustein was, apart from being a chess problemist, a talented architect. Like many problemists, his friends say that his main goal -- as an architect, an amateur musician, and a chess problemist -- was a search after beauty. Recalls his father (my translation):


At age 13-14 he began to be interested in chess... and then in solving chess problems, joining the Israeli Problemists' Association and even winning prizes.

One day in 1970 I was called by the head of the problemists' association in Haifa, Mr. Yosef Bierer [ph. spelling -- A. P.] and asked me why Shaiy doesn't come to get his cup. It turns our that he won the national problemists' cup [i.e., the Hendel cup -- A. P.] that year, but didn't come to get it, probably out of shyness or modesty.

'You don't know what a talent you've got', added Bierer.

The Israeli problemist association also published a condolences ad in Shachmat (Jan. 1973, p. 7) and established a memorial cup in his name.

Solution to above problem (highlight to view):