This game was one of two games lost in a simultaneous display by Samuel Herman "Sammy" Reshevsky given in Haifa, Israel, on Nov. 24th, 1958, during the first international tournament held in Israel (which he won). The overall result was +31 -2 =6.  Goes to show that even the great suffer from chess blindness! 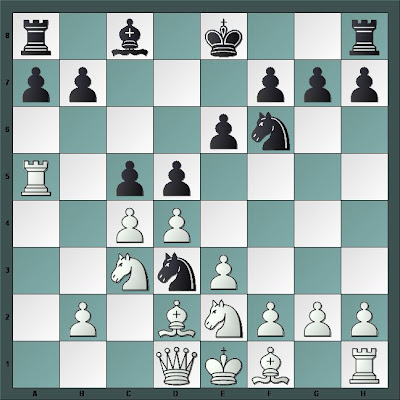 Portrait of an ArchDeacon by Ilya Yefimovich Repin, 1877. Image hosted at www.wikipedia.com by permission of the State Trtyakov Gallery, Moscow, Russia.

From the same interview with Eliezer Pe'er as the previous post:

'Victor Winz and other Tel Aviv player would then [in the 1930s and 40s - A.P.] play a lot of speed chess in the Vienna Cafe, in the Nahalat Binyamin neighborhood in Tel Aviv. They had no chess clocks, so they would pay an onlooker a few pennies to hold a walking stick and bang it on the floor every ten seconds, to play ten-second chess.'

From an interview with Eliezer Pe'er:

'When I learned chess [in the early 20s in Poland] I was taught that one starts with two moves. Also, if one made an illegal move, the penalty was to move with the king.'

Pe'er isn't the only one who mentioned such a penalty move, though he must be one of the last people living who was taught it as a child. This penalty move was often imposed in the 19th century. For instance, Robert Kemp Philips' Inquire Within For Anything You Want To Know Or, Over Three Thousand Seven Hundred Facts Worth Knowing (1859) mentions, inter alia, that:

This rule was apparently still in force during the first world war, at least in some places. (At the time, no international organization such as FIDE existed to standardize the laws.) Gyula Breyer allegedly(*) used it in a game played in Budapest, 1917, with Johannes Esser (The game score is from chessbase's 2005 "Big Database"; the comments from Eliyahu Fasher's book, Shachmet le'Hana'atcha, p. 184-185): 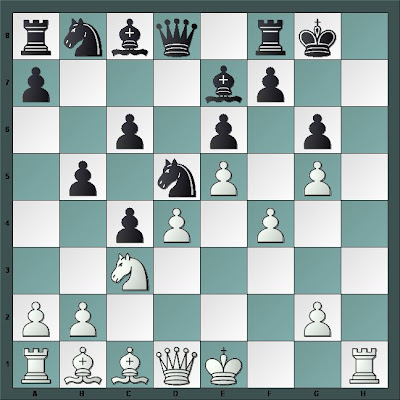 'Breyer, playing White, sacrificed a knight in the opening and upon reaching this position realized the white king has to be on f1. But, fearing that if he will play Kf1 -- clearly an illogical move -- his opponent will become suspicious. So he "mistakenly" touched the a1 rook. He apologized, but his opponent demanded the arbiter apply the law and force Breyer to move his king. After a long argument Breyer "relented" and the game continued: 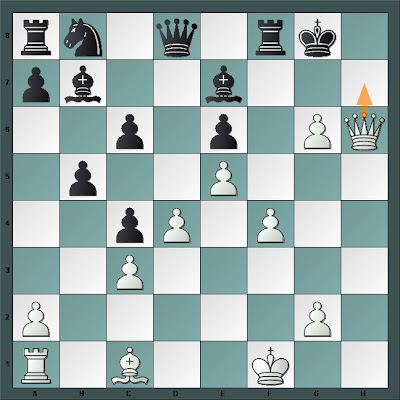 'Now it is clear why the white king has to be on f1 [to prevent 26. ... Bh5+ -- A.P.] Despite being up material, Black cannot avoid defeat. Black tries to return material, but it does not help:

(*) I say 'allegedly' because Fasher gives no sources for this story, and, as reliable his book is on all matters relating to chess in Israel and Palestine (being one of the most important figures in that field for over 40 years), he sometimes reports as fact tall tales about the old-timers. E.g., he accepts as accurate Zukertort's claims of being a medical doctor and knowing nine languages fluently, the suprious Gibaud-Lazard "shortest master game", etc. What's more, chessbase adds a few more moves (26. ... Kh7 27. Bg5+ Kg8 28. Qg6+ Kh8) before Black's resignation, which do not appear in Fasher's account. If someone can find more reliable evidence for this story, I'd appreaciate it.

'During the [British] mandate, chess activity [in Palestine] was very limited and centered around the three large cities [Tel Aviv, Jerusalem, and Haifa]. Chess activity elsewhere was minimal. It should be noted that the problemists were active in the Hityashvut ha'Ovedet [the organization of the small agricultural communes, the kibbutzim] and one of the most original ones was the late Yehuda Weisberg, who fell during the [1948] war of independence in the battle of Sejera. 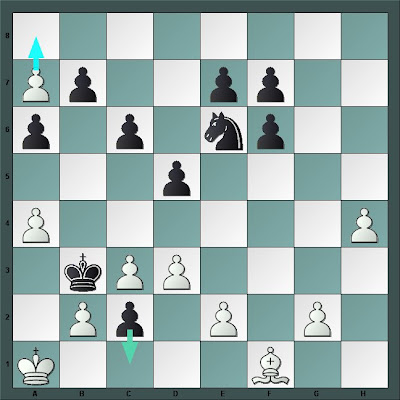 'Above is one of his problems, which we read about in the letter he sent to his friend Yechezkel Hillel, then a shepherd in Phoria in the lower Galillee: '"I am sending you a new problem and ask you to check it and get it published. Its justification is a tough nut to crack and I doubt you'll be able to overcome it..."

'In Hillel's answer we read: "I thought about this problem for four days of sheep-herding before I solved it -- really a great idea!..."

'After this story was published in La'Merchav on May 8th, 1959, I received a letter from Levi Herzog from Ma'abarot  kibbutz with an interesting story. Levi was an active problemist in Hungary, and when he emigrated to Palestine continued with his hobby in the Emek Hefer kibbutz, where he was a shepherd. He continued to send his problems to Hungary, since there was no possible venue for publications in Palestine. Over the years he acquired ties with the editor and continued with them after the state [of Israel] was founded [in 1948]. Once the Hungarian editor asked him to add a few personal biographical details, and [Levi] added, inter alia, that he is a kibbutz member and a shepherd.

'This time the editor's answer was short: "I am very glad to hear that in your Asiatic country shepherds reached such a high level in chess". Levi received no reply to his letters any more.'

Solution (Originally published in Fasher's The Israeli Problemist, 1964. Highlight the hidden text below.) 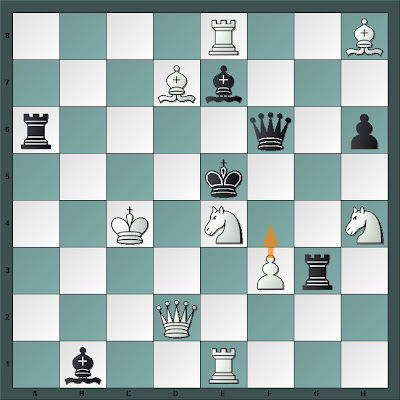 'White to move and mate in one.'

The solution (printed upside down in the book):

'Anybody who couldn't solve it will get the money he paid for this book refunded.'

(*) Jeremy Gaige's indispensable Chess Personalia: A Biobibliography has 'Eliahu' Fasher instead. Both 'Eliyahu' and 'Eliahu' are reasonable Hebrew-to-English transliteration of the same Hebrew name (that of the prophet known in the KJV of the Bible as Elijah), but I believe the former is more phonetically accurate. 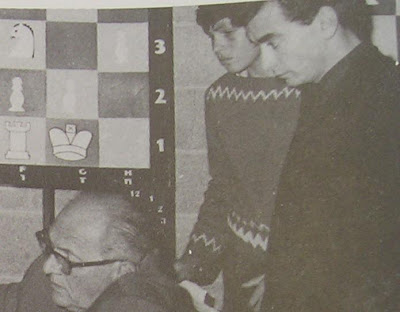 There are two cliches about chess players and crime: one, that they are devious and cunning, and therefore prone to commit complicated crimes nobody can solve. The fictional Sherlock Holmes famously tells Dr. Watson, 'Amberley excelled at chess -- one mark, Watson, of a scheming mind' (in The Adventure of the Retired Colourman). W. H. Wallace, as Edward Winter notes (check 'Chess and the Wallace Murder Case' in Winter's Chess Notes), was viewed with great suspicion for just this reason when his wife was murdered--despite the fact that he was a third-rate player.

On the other hand, chess players are (for some reason) considered intelligent, so they are sometimes asked (or nominated themselves) to solve real-life murder mysteries. Hence Ray Keene claimed that he had helped solve a murder case using his deductive abilities to make sense of the widely-published clues (a map of some sort, presumably drawn by the perpetrator) in Mycroft Holmes-fashion. Like Sherlock's brother (in, e.g., The Bruce-Partington Plans), he allegedly solved the case sitting in his chair, using no more than his amazing powers of deduction. It should be added that Keene's claims were met with general skepticism. (See Chess Monthly, Nov. 1990, for his account.)

There are, however, exceptions. Sometimes chess players are criminal, and sometimes chess does help solve crimes in interesting ways. The case of Adrian Schwartz illustrates both. Schwartz, a promising young player, was eventually captured and convicted as a serial rapist a few years after this photo was taken. He is in prison to this day. [Update, 2012 -- he was recently released after serving his last sentence of 20 years.]

Also, as Itzhak bar-Ziv told me, Schwartz, as a young man, went AWOL from the army. The army couldn't locate him for months, but Schwartz saw no reason why being a fugitive should bar him from playing in a tournament he qualified for. [Update, 2012: Avraham Kaldor notes it was an important local tournament, probably the national championship's quarter-final or the Lakser club's championship. Update 2022: it was the testing tournament for the youth chess championship in 1963. See Shachmat, April 1964, p. 9] The army put two and two together, and sent two MPs to nab him as he was playing. They almost did: he evaded them at the last moment after (Kaldor says) giving them both an unexpected shove as they held him and escaping. He remained at large for a few more months.

So, for once, chess did actually help solve a crime, or at least (almost) capture a criminal.
פורסם על ידי Avital Pilpel ב- 12:44 AM No comments: 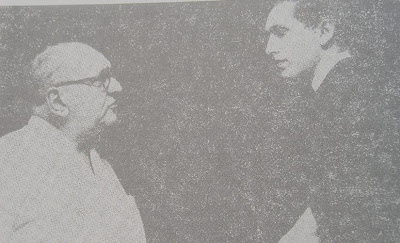 The late Bobby Fischer was known, at the end of his days, for his paranoid antisemitism, despite the fact that he was -- technically -- Jewish (since he was born to a Jewish mother). It wasn't always that way. In 1968, Fischer had participated in a tournament in Natanya, Israel, where he met all the local players, including Czerniak, as in the photo above.

Many of those I interviewed participated in the event, as players or spectators. Nobody had the least complaint about Fischer's behavior. They all praised him as perfectly correct and fair, both to the players and to the organizers. The one complaint was that he was a loner who did not often participate in post-mortems and, in general, did not mingle with others (he came to play, not to socialize).

But all agreed that this was, of course, his prerogative, and he, at the time preoccupied with achieving the world championship, could hardly be expected to socialize with all those who wished to claim his attention.

A Scientific Analysis of Chess + An Original Prize

From a humorous article by Prof. Isaac Bernbloom, at the time (1963) the head of the experimental biology department in the Weizmann Institute, Rehovot, Israel (originally published in Rehovot, the Institute's journal, reprinted in Sa'chmat, Yarchon Israeli le'Sachmat, year 2 no. 4 [Nov. 1963] p. 18:

'Medically, chess is a relaxant, since it prevents the person from working for hours on end. It is also an antidepressant, since it gives the person an excuse not to feel guilty for their laziness. It is a sport: one can sprain one's wrist when trying to castle in a difficult position.

'A chess player needs imagination, so as to find barely credible excuses for his wife as to why he's late for dinner again. He needs to be daring, in order to find the local chess club in a dangerous neighborhood in a strange city as a tourist. He needs agression, in order to keep kibitzing loudly in the club until someone takes pity on the disturbed players and asks him to play. Finally, he needs patience, in order to fight to the bitter end in a lost position, to his opponent's, and the observers', obvious displeasure.

'Finally, a problem which I composed recently: 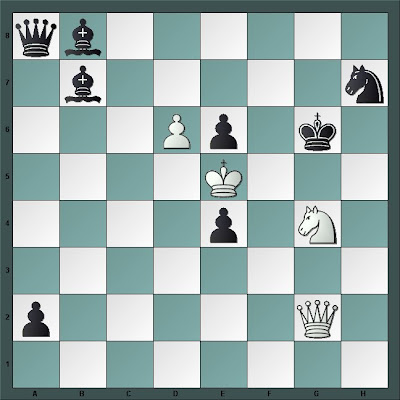 'White to play and win. Anybody who sends me the correct solution will win an honorary appointment as the local club's annoying kibitzer.'
פורסם על ידי Avital Pilpel ב- 1:15 PM No comments:

Well, I've been wanting to do this for a long time, but I finally found some time to mess around with blogger and change the way the blog looks. Among other things, I added a poll (at the end) and a slideshow of chess pictures from flikr. I hope it is easier to read this way.
פורסם על ידי Avital Pilpel ב- 8:48 AM No comments:

'The government's legal counselor, Gideon Hausner [also the prosecutor in Adolf Eichmann's trial -- A.P.] said in a press conference that Eichmann, when in prison in Israel, received about 20 chess problems, "all of which, for some reason, ended in stalemate." The mystery was solved by our Argentinean master, Moshe Czerniak: "stalemate" in Spanish is ahogado, meaning "strangled"'.
פורסם על ידי Avital Pilpel ב- 7:21 AM 2 comments: