Several correspondents, including Moshe Roytman, notified me that Tel Aviv's Chevra Kadisha web site (link in Hebrew) notes that Kniazer had been born on April 1st, 1894, and died on May 4th, 1958. Thanks to all the correspondents!
פורסם על ידי Avital Pilpel ב- 11:04 AM 1 comment:

Taking a page from Edward Winter's Chess Notes, perhaps the readers might be interested in solving a puzzle about what famous chess personality is in the picture. Who, for example, is this person? 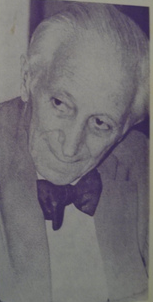 To non-Israeli readers: this is a fair question. He is a very well-known chess personality. Hint: the photograph was taken during his visit to Israel in the 1970s.
פורסם על ידי Avital Pilpel ב- 8:46 AM No comments:

More About Avraham Labounsky, the First Secretary of the Palestine Chess Federation


We have noted before that Avraham Labounsky was the first secretary of the Palestine Chess Federation (his brother, Nachum Labounsky, was elected the first treasurer in the same meeting).

Moshe Roytman now informs us that a capsule biography of him (from which the above photo is taken, in British Uniform; link in Hebrew) was published in Davar on Feb. 21st, 1947, p. 23, on the occasion of him winning the [1946] Tel Aviv championship -- ahead of Mendelbaum, Kniazer, etc. The full crosstable is found, e.g., in Shaul Hon's Ptichot Be'Sachmat [Chess Openings], Shach Pulishers: 1964 [1957], p. 90.

Of particular interest is the claim that he started 'getting interested in chess at age 16', which is relatively late; his winning Rome's city championship in 1933 when he studied there; and playing a match against 'Bizzio [ph. spelling -- ביזיאו], the 'Roman champion', winning 6:2. It is also mentioned that when he was in active servive in the British Army (1943-1946), he 'organized simultaneous displays in the Jewish companies'. Surpisingly, his role in the Palestine Chess Federation is not mentioned.

These companies -- which served in branches as varied as the Auxiliary Military Pioneer Corps to transportation and camouflage companies -- were the forerunners of the more famous Jewish Brigade, est. late 1944. More information (in Hebrew) about these units can be found here.

Note: Ami Barav adds that correct spelling of the name is not, as said before, 'Levonsky', but 'Labounsky'


We had already noted that there is an Emanuel Lasker street in Tel Aviv. Our frequent correspondent Moshe Roytman had found the date the street was named after him. This short notice, 'A Street in Tel Aviv Named After Emanuel Lakser', tells us the Tel Aviv Lasker chess club's management asked the city council to name a street after Lasker, and the city council accepted this 'a few days ago'. (Update 25/12/2014: And thanks to Mr. Roytman for correcting my spelling mistake in the title of this post)!
פורסם על ידי Avital Pilpel ב- 6:03 AM No comments:

'This Man had Murdered Me.'


Raafi Perstiz was mentioned in this blog many times. He came from a family which had several prominent members. His mother grandmother, Shoshana Persitz (1892-1969) was a prominent Zionist activist and educator, which, inter alia, was a member of the Israeli Parliament (Knesset) in the first three Paeliaments, and won the Israel Prize for education.


His great-grandfather -- Shoshana's father -- was Hillel Zlatopolsky, the founder of Keren Hayesod, philanthropist, author, and much more. When Zlatopolsky was assassinated in Paris in 1932, this was front-page news throughout the Jewish world -- including in Palestine, where Ha'aretz (above) put the news on its front page, and added a large death notice on the same page, noting that "Our dear father, Mr. Hillel Zlatopolsky, passed away in Paris on Sunday, 12 Kislev [Of the Hebrew year 5693, i.e., Dec. 11th, 1932 - A.P.]", signed by "Shoshana Persitz and her family".

Zlatopolsky was assassinated by a disgruntled employee, Leon Laval, who committed suicide. Doar Ha'Yom reported, two days later (Dec. 15th, 1932), also on the first page, that the murder scene was especially dramatic: after hearing shots from his office, the police was called, finding the shooter lying on the floor after having shot himself, and Zlatopolsky, 'deathly pale', whispering that 'this man had murdered me, shot me in the stomach' and asking the police to inform (inter alia) his son.