Above, we have a clip from the chess column in Davar, noting Czerniak's victory in the 1951 Reggio Emilia tournament in Italy. We thank a frequent contributor to this blog for the information. The column notes that he was also awarded the IM title by FIDE, and that this victory is the first victory of an Israeli player in an international chess tournament.

The column adds a letter from the Israeli consul there, Israel Eshel, who notes that the local press refer to Czerniak as a 'Palestinian', and only after he and the consulate protested that this was correct to 'Israeli' in the press. We add that, before the establishment of the state of Israel in 1948, 'Palestinian' was the usual term used in English and other languages for Jews who lived in what was then the British Mandate of Palestine.

The column also wonders how to use Czerniak's winning to get funding for the ICF, in the only practical way many organizations in Israel at the time could gain any funding, to wit, with government assistance. The key issue is who will be the next minister of education after the elections, it is noted.
פורסם על ידי Avital Pilpel ב- 7:57 AM No comments:

The Education of a Chess Player

Above, we see a page from Israel Rabinovich-Barav's notebook of annotated games, which he kept as a young man. The notebook was loaned to me by his son, Ami Barav. The games are mostly famous ones from the 19th and early 20th century, of which the first, Schiffers vs. Chigorin, St. Petersburg, 1897, is a typical specimen. The game above is Blackburne vs. Marco, Monte Carlo, 1901.

There are also some games where one of both of the opponents are unnamed, and one curiosity: a game allegedly by J. J. Rousseau (vs. an unnamed opponent, given in other sources as prince Conti). Barav understandably didn't know that this game, widely circulated in various sources from the mid-19th century onward, was proven by the chess historian H. J. M. Murray to have been a forgery as early as 1908, as shown by Edward Winter in a definitive article about Rousseau's chess career.

Why did Barav copy out famous games when he could just read them in a book? The reason is obvious. Barav uses the tried-and-true method that (almost) all strong players used to get better: learning from game collections of other players, and trying to understand what both players were doing, each side's plan, where the crucial mistake was made, why it was a mistake, etc.

For this purpose, Barav annotates on his own many of the games, sometimes in great depth. His annotations are sometimes made at great length; e.g., a Tarrasch - N.N. brilliancy is annotated in five whole pages (10 columns), almost own his own.

In the Blackburne-Marco game sample page above, he notes, for example, that 5...Bxe3 is bad since it 'opens the f-file for the [white] rook', and similarly that 10,,,Nxb3 is weak since 'Black wants to gain the upper hand on the queen's side, but by this weakens the king's side'.
פורסם על ידי Avital Pilpel ב- 7:28 AM No comments: 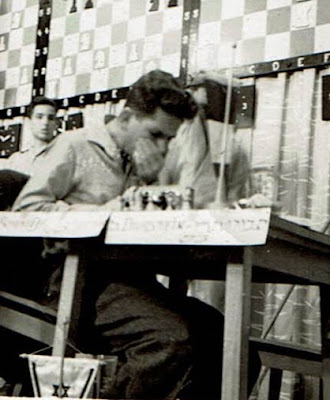 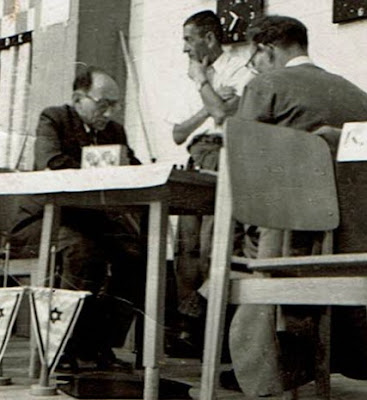 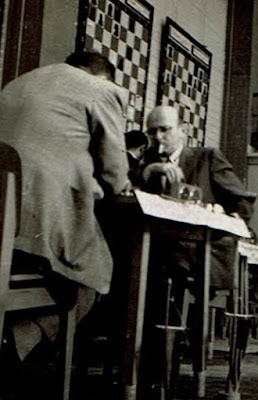 Ami Barav, Israel Rabinovich-Barav's son, kindly provided us with the following photos he took, as a young boy, of the players in the international tournament that took place in Tel Aviv and Haifa in 1958. They are from the 13th round. The photos show, from top to bottom, White mentioned first: