A Quiz for our Hebrew-Speaking Readers

The following rather odd game was published in Doar Ha'Yom, on 23/4/1923, p. 4, as "a miniature player in the Jerusalem Passover championship":

Solution in the next post.
פורסם על ידי Avital Pilpel ב- 10:14 AM 2 comments:

Surprisingly, it might be that he learned the "trick" from Meir Rauch (1909--?), a Palestinian (later Israeli) player who, like Najdorf, had been stranded in Argentina in 1939 when WWII broke out in Europe, being part of the Palestinian team (1st reserve board). Our frequent correspondent Moshe Roytman brings to our attention two articles in the Israeli press:

In the "Fil" shoe store in Allenby St. in Tel Aviv, works a short, thin clerk -- Meir Rauch. This modest man is the father of a world record, achieve through fun and entertainment.

In 1939 our chess team travelled to the chess Olympiad in Argentina. In the meantime the war broke out and many players were stranded there after the Nazis overran their countries. Among those was the Warsaw player Mendel Najdorf, who played for Poland. He won the "second homeland"'s championship a few times and, in gratitude, changed his name to "Miguel". This ambitious Jew decided to make a name for himself in chess, and if he can't be world champion -- to at least be a champion in blindfold chess. He did not then know the technique of this game, where the player competes with his opponents without looking at the board. He learned it from the Israeli player Rauch, our champion in this field, who long ago played against 18 opponents blindfold in Germany.

Najdorf learned quickly and, between tournaments, would train himself in blindfold chess, Soon the pupil overtook his Israeli master and set a world record playing against 45 opponents at one time, considering 45 different plans without looking at the board.


In Ma'ariv, Dec. 30th, 1960, p. 12, Shaul Hon summarizes this story in one paragraph in an article about Najdorf (on the occasion of his visit to Israel), adding that Rauch is a member of the Reti chess club in Tel Aviv, and also holds the Israeli record for a blindfold simultaneous game (8 players, at the time).

The 1956 story, notes Roytman, seems somewhat "puffed", giving to Rauch as much credit as possible, i.e., in claiming that Najdorf didn't know how to play blindfold chess at all before training with Rauch, which seems unlikely. I add it is has some obvious inaccuracies:

1). It is unlikely Najdorf changed his name to Miguel out of gratitude to Argentina, as opposed to the immigrants' age-old custom of changing a name to one that fits with the new country's culture.

2). There is, of course, no such thing as the "world blindfold champion". If the phrase is used loosely to mean holding the world record in the number of opponents played simultaneously, Najdorf's motivation was (as noted here for example) to notify his family in Europe of his whereabouts.

Is anything more known, however, about the Najdorf / Rauch connection in relation to blindfold chess?
פורסם על ידי Avital Pilpel ב- 12:43 PM 1 comment:

I had promised in "Chess and Gefilte Fish" to load pictures of the chess set discussed there as soon as possible. Well, the owner of the set had kindly sent me pictures of the chess set. It is a beautiful, obviously Russian-style set, from early in the 20th century. It was made in Russia or the USSR (the set has cyrillic markings) but there is no exact date. Can any reader solve the mystery of the set's maker? 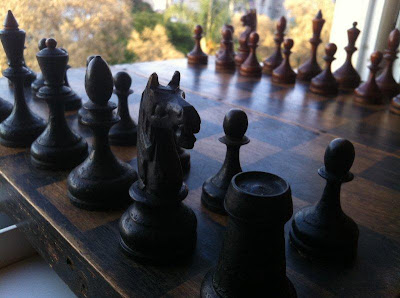 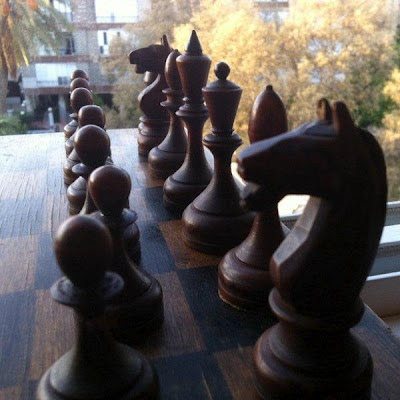 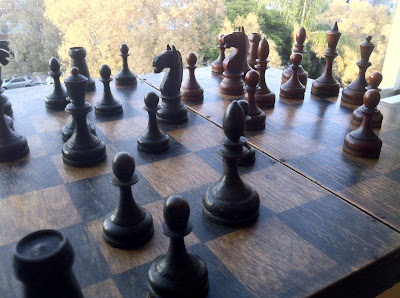 Chess prodigies are not often known for achievements outside chess, although certain exceptions exist -- the most famous being probably Philidor, who was also a talented musician, and Emmanuel Lasker, a mathematician and philosopher.

I suggest that perhaps the man who made the greatest contribution to society outside chess was Ya'akov Bleiman (1947-2004). A child prodigy from Vilnius (Lithuania), he came with his parents to Israel in the 1950s and quickly began to win numerous tournaments in the 50s and 60s. Nicknamed the "Vilna Gaon" (the "Genius from Vilnius", after the title of the famous 18th century rabbi), he received a rare tribute: a picture of him (painted from a photograph) was published in what was then Israel's most popular general encyclopedia for youngsters, Tarbut (see above). There is another picture on the same page -- of Emmanuel Lasker...

He then studied engineering, and was the head of the Israeli SPICE project. He won both Rafael's "manager of the year" award and the Israel Defense Prize -- Israel's top award for defense-related projects -- for heading the project. He sadly died of ALS ("Lou Gehrig's disease") when only 57.
פורסם על ידי Avital Pilpel ב- 4:15 AM No comments: